It is not meant as a replacement for any preexisting operating systems. It is best understood as a wrapper around them, a shell that gives them more abilities, such as the capacity to be migrated from one computer to the other, or to be duplicated at will.

This is a screenshot of a proof of concept that relies on the Kernel-based Virtual Machine (KVM) module for Linux, QEMU, libvirt, virt-manager and GNOME Shell running on Wayland.

Hardware-wise, a Skylake-based Intel NUC, with IOMMU-based hardware-assisted virtualization enabled, is being used.

Public clouds provide on-demand computing resources over the Internet. Almost all of them leverage the Kernel-based Virtual Machine (KVM) module for Linux.

Alas, there is currently no production-ready desktop-oriented Linux distribution designed from the ground up to leverage KVM locally.

Bring some of the cloud back home

Phyllome's main intent is to piggyback on some software- and hardware-related innovations used by cloud providers and make them available to a wider audience using off-the-shelf hardware, with a focus on performance and usability.

Eventually, using a software-based or so-called 'virtual machine' should become indistinguishable from using a real one.

In Phyllome's case, it would be a feature, not a bug or hack to be able to use a virtual machine locally that mimics a real one, while at the same time offering more flexibility, as it could be duplicated at will, easily backed up, or migrated to another host for any reasons the user deems fit.

Linux will run in the background, hidden in plain sight, while allowing the user to switch to a different operating system if desired. Eventually, the user might even forget the virtual nature of the computing environment.

As such, Phyllome is yet another attempt to bring Linux to the desktop, albeit more covertly this time. 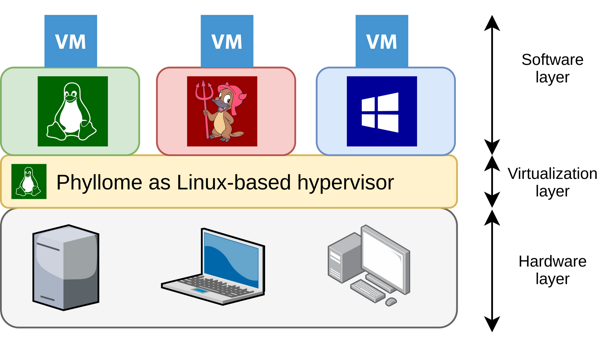 If you are wondering, the platypus is Darwin's mascot. Darwin is an open-source operating system used as the foundation for macOS and iOS.

Grav was with by Trilby Media.